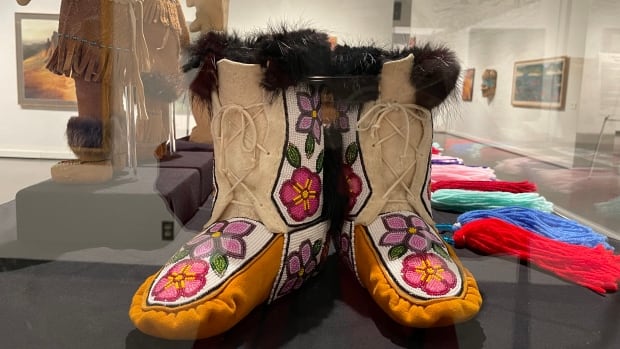 The main gallery at the Yukon Arts Center opened on Monday for the 40th exhibition of the permanent art collection.

This year’s exhibition, titled Collective memory, celebrates the last four decades with all the changes, evolutions and developments seen in the artistic community of the territory.

Garnet Muething, the art curator at the Department of Tourism and Culture, said there is a wide variety of artistic mediums, from beadwork to carvings, sculptures, large canvases and more.

“For the first time, we are showing over 20 new acquisitions from the collection that have never been shown before. So people can see these brand new pieces alongside pieces that have been collected since the early 1980s” , she said. .

The Permanent Art Collection was founded in 1981 to preserve, honor and share the visual arts of local artists.

With the new acquisitions, the collection now has over 500 works by 275 artists, most of whom are Yukoners.

“We also have artists who either had a meeting with the North or came to spend time here,” Muething explained.

The collection also includes a range of artists, from established talents to people who are at the start of their careers.

Some pieces on this year’s new list of acquisitions come from artists who have never been featured before, such as Cécile Girard from the Association Franco-Yukonnaise (AFY).

In 2017, for Canada’s 150th anniversary, the AFY created From thread to history, a community project that recreated, in the form of dolls, the Francophone characters who marked the history of the territory. Girard and 13 other designers made the dolls.

“When we started the project, we didn’t know how it was going to turn out, but they were so beautiful that we wanted to keep them together,” said Girard, who moved to the Yukon four decades ago.

All 14 dolls include characters from the gold rush and other historical moments and will now be permanently kept in the collection.

“These dolls celebrate the history of the French community and French history here in the Yukon, so knowing that they are part of the permanent art collection means so much to me and I’m sure the community as well. “, said Girard.

Although the permanent art collection includes hundreds of pieces, Muething, the art curator, said only a third of the art is on permanent display. This includes approximately 80 pieces at the main gallery, a few in Yukon communities, and the rest are stored in a temperature-controlled vault at the Yukon Art Centre.

“It’s a really unique opportunity to see such a large part of the collection, as we are normally able to hold smaller pieces of it,” Muething said.

The Collective Memory exhibition will be open to the public until February 25, 2022.