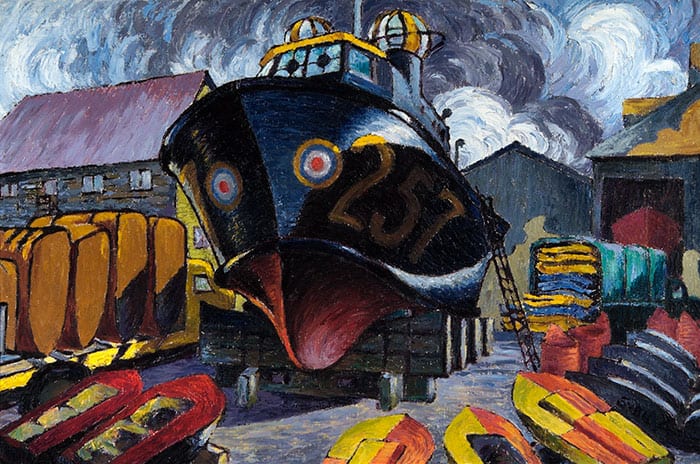 Towards the Stars: Illuminating the Art Collection in 50 Works

By Leeann M. ParadisoOctober 15, 2022No Comments

Marking 50 years since Queen Elizabeth II opened the RAF Museum in London on November 15, 1972, our new art exhibition celebrates the occasion with 50 key works from the collection of important 20th century British and European artists.

“To the Stars” takes its name from the RAF motto, “Per Ardua Ad Astra”, which translates to “Through Adversity to the Stars”.

Ranging from performances that trace the beginnings of civil aviation at Hendon and the Royal Flying Corps, to World War II and the Cold War era of jets and space, the exhibition explores the perspectives of artists on RAF operations and cultures as well as broader themes of flight, ambition, myth, conflict and technology.

As in the dizzying compositions of CRW Nevinson, Enrico Castello and Cyril Power, the abstract styles of vorticist and futurist art celebrate the dynamism of early aviation and convey radically new aerial visions of the machine age. Sybil Andrews also used bright colors and hard-edged designs in her later depictions of RAF sea rescue vessel boat building, replacing what she described as ‘tasteless’ reportage with a striking and modern visual language.

Blending tradition and modernity, the paintings and watercolors of Paul Nash, John Armstrong, Eric Ravilious and John Minton reflect on war and flight with imaginative and illustrative approaches, drawing on influences from English Romanticism and Surrealism. Official World War II war artists, including Nash, Ravilious, Thomas Hennell, Anthony Gross, and R. V. Pitchforth, embraced watercolor as a medium that was both rapid and expressive, heralding a revival of the historically celebrated art form. and quintessentially British.

Figurative compositions depicting the people, roles and social life of the RAF – such as by Laura Knight, Evelyn Dunbar, Alfred Thomson, Patrick Procktor, Ethel Gabain and Boyd & Evans – not only reveal the diversity of artistic styles over time but raise questions of institutional diversity within the RAF and in the process of artistic commissioning. Colonial recruitment, male relations, and the promotion of women into formerly male roles and ranks are topics that invite contemporary reconsideration. Additionally, the exhibition reveals how women artists of the Second World War – including Sybil Andrews, Anne Newland and Rosamond Elgar – attempted to sell their work and submit commissions to the Advisory Committee of War Artists, while in the most cases, these were refused. The exhibition aims to reassess these works beyond the patriarchal prism of the time. 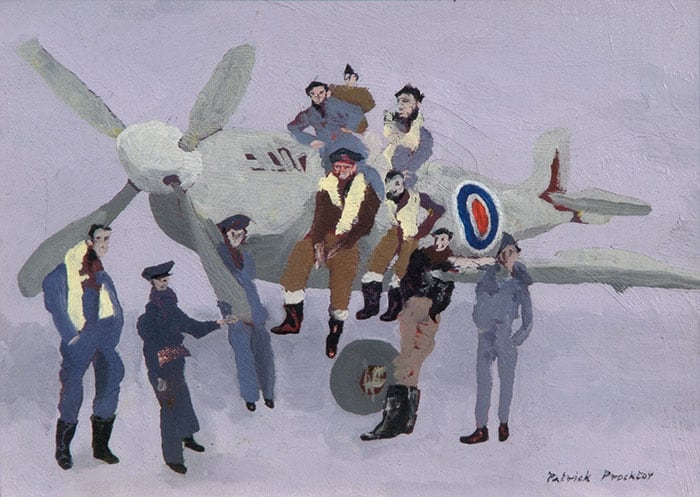 Lesser known official war artists are also celebrated in this exhibition – among them Leslie Cole, Charles Cundall and David Bomberg. Best known for his pre-World War I vorticist works, Bomberg’s World War II commission to depict an underground bomb store in the Midlands was at the time considered a failure by the War Artists’ Advisory Committee, who considered the expressionist style of images contradictory. with the public’s conservative taste for clarity of representation. However, today the body of Bomberg’s wartime oeuvre – which includes the Museum’s large charcoal drawing, “Bomb Store” (1942) – is celebrated as an important touchstone of his artistic career.

Postwar art in the exhibit includes prints by Eduardo Paolozzi that depict World War II and early Cold War subjects from the perspective of American mass culture. In collage magazines and science fiction comics, Paolozzi reflected on the popular imagination around the emerging era of jet aircraft and space. RAF jet aircraft are depicted in late Cold War works by figurative painters Bryan Organ and Humphrey Ocean, whose “portraits” of the Hawker Harrier and Electric Lightning were commissioned by the Museum in the 1970s and 1980s. 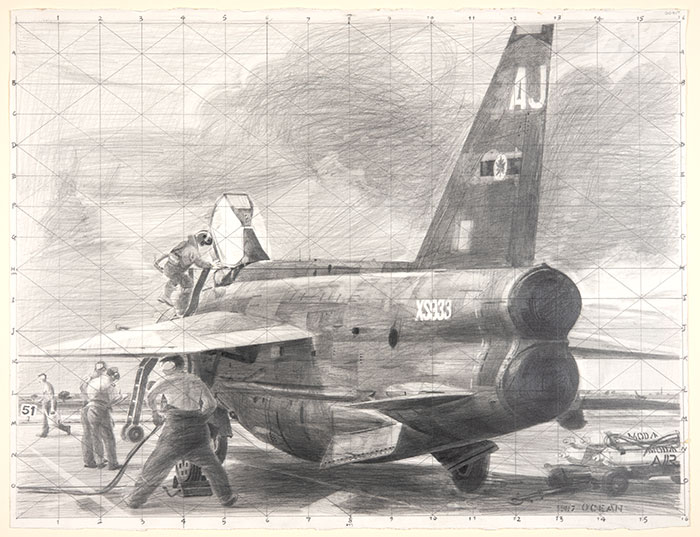 Some post-war artists, however, looked with trepidation at the reputations gained and lives lost during World War II, while dwelling on contemporary space shuttle missions and the nuclear arms race. In the early 1960s, the ethical tensions between ambition and heroism on the one hand and hubris and disaster on the other became stark for artists such as John Armstrong, Michael Ayrton and Elisabeth Frink, who pondered the symbolism of Icarus and the fallible winged man as personifications of seemingly carefree time.

The exhibition features works acquired from the beginnings of the Museum’s art collection. The museum’s founding director, Dr John Tanner, who earlier in his career taught ‘Extra Mural’ art history (or lifelong learning) at the University of Nottingham, said began to develop the art collection through his connections with London art dealers and artists and their estates. Early in the collection, he and the curatorial team affordably purchased works of unique significance, some of which would now pose a challenge to acquire without fundraising assistance. Highlights include CRW Nevinson’s seminal ‘Taube Pursued by Commander Samson’ (1915), a body of work by Richard Carline’s Official War Artist from World War I, including ‘Baghdad and River Tigris from 10,000 ft’ (1919), Cyril Power’s Grosvenor School linocut ‘Air Raid’ (c. 1935) and Laura Knight’s large drawings for her Official War Artist Painting ‘Take Off’ (1943) . 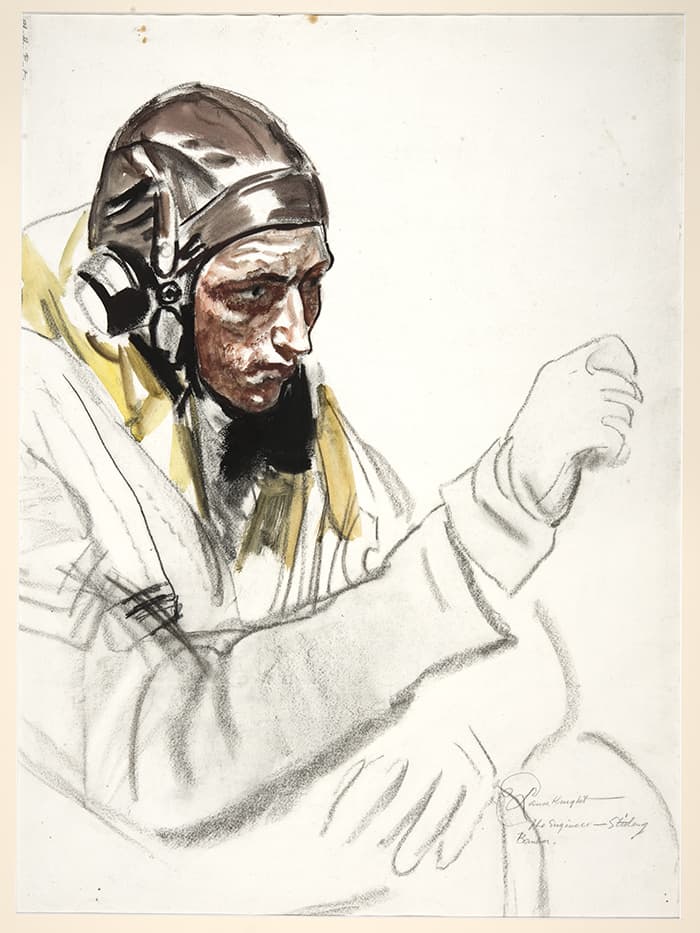 Complementing our own works on display are those from the nationally significant collection of official Second World War military art, on long-term loan to the museum from the RAF’s Aviation Historical Branch (Department of defense). Originally owned by the Air Ministry, the collection comprises 400 works which were commissioned and purchased for the nation by the official government-run War Artists Program under the direction of art historian Sir Kenneth Clark, Chairman of the War Artists Advisory Committee.