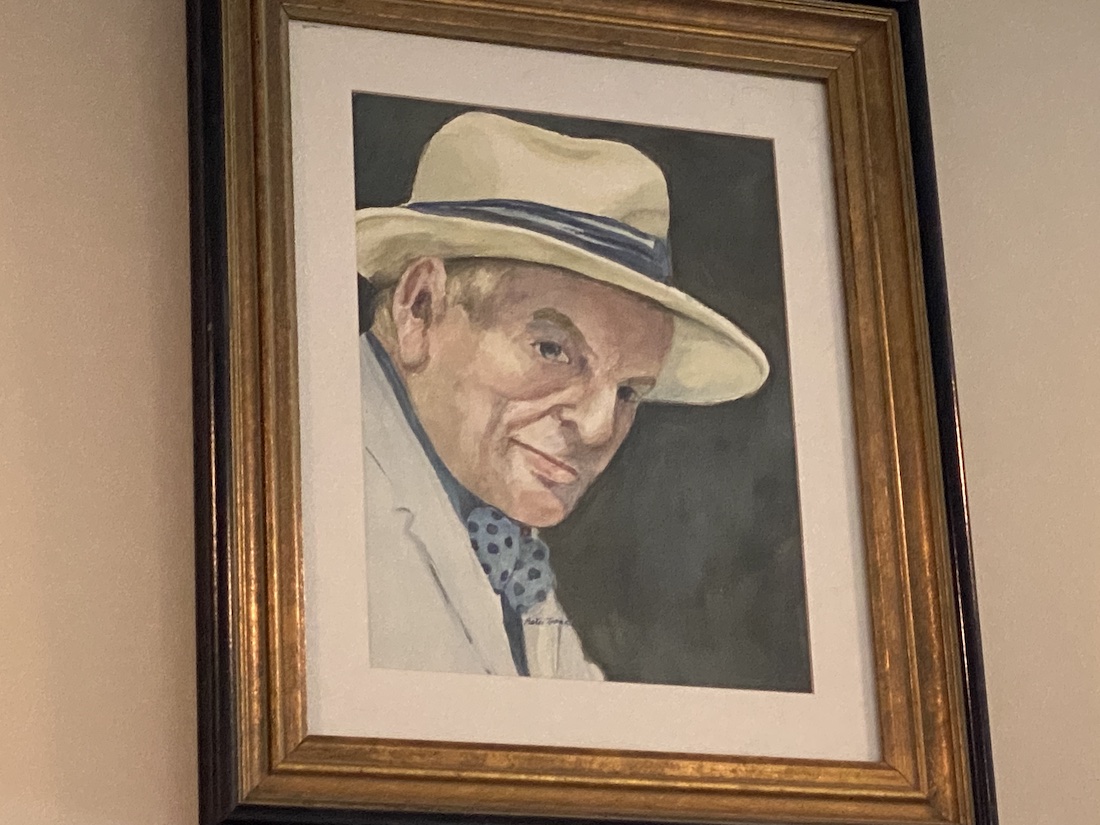 Tony Rivenbark’s art collection goes on sale to the public, including originals by Dorothy Gillespie and Claude Howell

“It was really cool to find some of the posters, photographs and flyers he kept during this time and over the years,” Art in Bloom gallery owner Amy Grant said Wednesday.

Over the past week, Grant and Andrew McDowell – friend and caretaker of Rivenbark, who died on July 19 – worked on pricing Rivenbark’s art collection, now on sale to the public by appointment throughout the weekend.

“He had this really cool photo that he took of the boxes of ravioli that Dorothy Gillespie used for her painting,” Grant said. “And he had another picture framed from the very first exhibition they worked on together in 1977. It was for his new art: 3D rolled paper.”

An American artist and sculptor, Gillespie’s painted ribbons – glossy enamel on aluminum – are a signature piece that has been exhibited in local, national and international museums. In the lobby of Thalian Hall, Gillespie’s 40-foot-tall “Colorfall” is always a welcoming attraction, as is “Hanging Starburst” in the lobby of the Wilson Center.

In Rivenbark’s riverside condo — where he moved in the last months of his life — Gillespie’s work stains the walls and shelves. Several free-standing ribbon sculptures rest among painted wooden blocks, and a large and rare abstract painting consisting of blue squares on canvas, created in 1976, dominates the living room.

Nearby is a dark ocher yellow dress that once belonged to Rivenbark’s dear friend, Wilmington painter Claude Howell. Howell taught at Wilmington College (now UNCW) when Rivebark attended school and took one of its classes.

“Claude was famous for wearing this when he entertained guests at his home at Carolina Apartments,” said Ray Kennedy, a local director and friend of Rivenbark. “It’s been part of Tony’s collection since Claude passed away in the mid-90s.”

There are several paintings and drawings by Howell – not the expectations the pastel sea life and seascapes for which the artist has become so revered (although a few also exist, but have been inherited by others close to Rivenbark).

Hand-drawn scenes of Wilmington are framed, one showing the historic Carolina Apartments and Fountain at 5th Avenue and Market Street. They will in turn become Howell’s Christmas cards.

“Claude used to draw the original and then, for lack of a better word, ‘mimeograph’ them and send them to people all over Wilmington, some who now have collections of Claude Howell Christmas cards. But this are originals.

Many self-portraits of Howell young and old are also on display, alongside portraits and caricatures of Rivenbark, created by other artists.

Easily over 100 pieces are presented.

“When Tony moved into Pier 33, he said he probably had more art in his apartment than there was in the entire complex,” Kennedy said.

Among the canvases of well-known alumni are also more recent works of art. This is what impressed Grant most about Rivenbark.

“He showed up at Nathan Verwey’s show at Art in Bloom years ago,” Grant detailed. “I believe he bought a mask. He wanted to put a red dot on Nathan; it was so sweet. Tony supported all artists, emerging ones in particular.

Grant was commissioned to research the paintings, sculptures, woodcuts, fiber art, and other media. She loved finding a Huber piece from the artist’s early days – “older, handmade paper and mixed media”.

“I would love to see an early work by Fritzi, like Tony had, in a body of work in a museum. A lot of that work should be,” Grant said. “Elizabeth Darrow, for example – although her work is already in museums – has a piece, ‘Casting Spells’, in Tony’s collection which is fantastic.”

Over the past week, Grant said she relived her own memories of Rivenbark while immersed in her business – such as the time he showed up at her gallery during the Christmas season. Art in Bloom offered discounts to anyone who recited a poem or did an artistic performance.

“Tony did the monologue from ‘The Oldest Living Confederate Widow’ – it was just amazing,” Grant said (he ended up buying some quirky art gifts for his whole family over the holidays).

While focusing on the stories of the artwork, Grant said she also discovered artists she hadn’t previously known other decades in Wilmington — many of whom, inevitably, were good friends with Rivenbark. Jane Peterson was one.

“She was before my time,” Grant said, “but did some really cool watercolors.”

McDowell said an original by Peterson and Gillespie, as well as a bust of Shakespeare, will be donated to Thalian Hall from Rivenbark’s collection. Peterson’s piece features a montage of some of Rivenbark’s favorite spots — Thalian, Costello’s, Caprice Bistro, UNCW — and the image of a lifetime achievement award he received in 2004.

“Jane moved to Cape Town, but she no longer lives,” Kennedy said. “When Tony visited P-town recently [before his death,] his daughter came to see him by car.

For as many works and artists as Grant and McDowell were able to identify, there were others that presented challenges. Rivenbark was known to travel frequently; he often bought art during his stays, colorful reminders of place and time.

“He’s been to Cuba three times,” Kennedy said, “before Cuba was even open for travel—he could get access through an artist visa.”

Photographs and paintings of the region hang, alongside architectural renderings of historic buildings from travels in Eastern Europe.

A red circular oil painting caught Grant’s eye by surrealist painter Nate Seubert, whom she had never heard of. She learned that he lived in Los Angeles, exhibited often in Santa Fe, and was included in private and public collections around the world.

“Tony’s collection is very much like him,” Grant said, “just really high quality items and beauty but from everywhere, everywhere.”

But not all of the plays Grant investigated yielded answers; she is still looking for two abstracts. One in particular was given to Tony in 1969, but Grant cannot decipher the artist’s signature, as well as an inscription on the back.

“It was gifted by Mr. and Mrs. Robert, but I couldn’t read the last name,” she said. “It’s already sold but it’s driving me crazy so I’ll keep looking.”

Other watercolors and acrylics on paper, one depicting images of sailboats, another landscapes and historic structures, were strewn across a table. The color palette was so light it almost looked faded.

“They were from Tony’s personal files,” McDowell said. “We think it’s actually his own artwork. He was asking for his painting supplies to keep him active even when he was sick.

“He talked to me a bit about painting,” Grant admitted, “but he ignored it and said, ‘I’m just doing it for fun’.”

Going through the collection, Grant said, was moving, a visceral representation of Rivenbark’s adoration for the arts. But it also reflected his life album.

“Tony had so many connections, people adored him,” she said. “So every piece he owned was alive – and will be attracted to the right buyer.”

As Kennedy browsed the assortment on Wednesday, he came across a watercolor, “Summer Palace in Hawaii,” painted by Peggy Chung.

“Wait,” he said, “I used to do the entertainment for American cruises in Hawaii and Peggy Chung was famous for her Hawaiian pictures.”

As he perused the paintings, a different memory flashed – particularly when he stopped in front of the original framed posters of the SRO Theater’s first performance of “Waiting for Godot”. Rivenbark acted in SRO under Doug Swink at Wilmington College.

“It was the first theater that brought me here,” Kennedy said.

Behind Kennedy was a work signed by Ivey Hayes, a Rocky Point artist who died in 2012, known for his exaggerated lines and bold colors. He frequently drew African-American images of the coastal South and inspired jazz. This particular poster was signed and numbered for the first Blueberry Festival design that Hayes was commissioned to do for the town of Burlaw in 2004.

“I can’t bear not having blueberries in my house,” Kennedy said. “I have a friend who was the blueberry queen of North Carolina, so I just have to have her.”

To make an appointment to view works for sale from Tony Rivenbark’s collection, email Andrew McDowell at artsale1858@gmail.com. Appointments can be made until this weekend; the address will be revealed to you upon contact. Hours are August 17-18, 2-7 p.m. and August 19-20, noon-5 p.m.

Rivenbark’s celebration of life will be held Aug. 27 at Thalian Hall at 5 p.m., with a procession led by a group from New Orleans Second Line to the Wilson Center afterward.

Want to know more about PCD? Subscribe now, then sign up for our morning newsletter, Wilmington Wire, and get the headlines delivered to your inbox every morning.