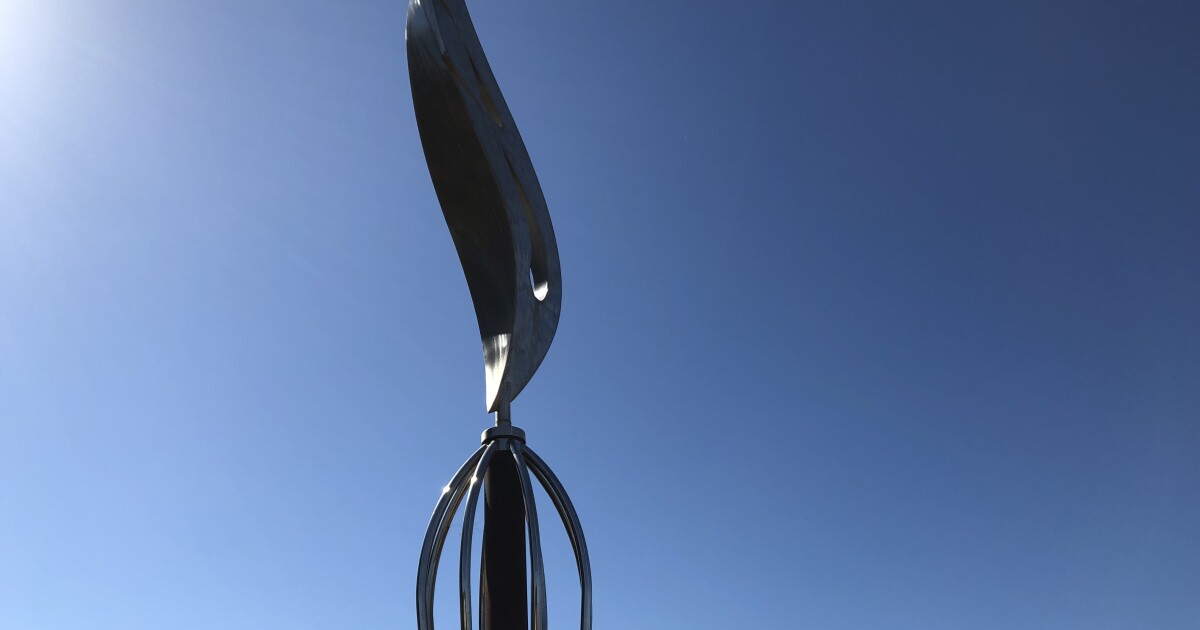 The town of Solana Beach is adding another sculpture to its permanent art collection.

City council members voted unanimously Oct. 13 to purchase sculptor Jon Koehler’s “Pinion” for $25,000, plus an additional $10,000 for renovations and a new base.

Standing 20 feet tall and weighing 250 pounds, “Pinion” was designed to illustrate the flight feather of a bird’s wing.

“On one side, the sculpture has a transparent color that contrasts with the sky,” according to Koehler’s website. “The other side is in stainless steel which reflects the bay, the cloud and the sea birds.”

It was installed at the corner of North Cedros Avenue and East Cliff Street after the city acquired it as part of its temporary public art program. The program has five active art sites, according to city staff: Solana Beach Towne Center, Lomas Santa Fe Median, Seascape Sur Beach Access, Tide Park Beach Access, and East Cliff Street Bridge, with one additional site that has been approved at the corner. readers from Las Banderas and San Andres.

Previous artworks the city has purchased include Brennan Hubbell’s “Yoga Tree” and Deanne Sabeck’s “Flower of Light,” both of which were originally part of the temporary art program.

“Over the years, community response has been overwhelmingly positive for this play,” Deputy City Manager Dan King told the council.

“Pinion” is part of Koehler’s “Monumental Art” series, which also includes a piece from the Port of San Diego art collection, according to a city staff report.

The Solana Beach Public Art Commission voted 6 to 1 to recommend the purchase of “Pinion” at a meeting in September.

“This is an impressive piece by a renowned artist, a good addition to the city’s collection in my opinion and obviously popular,” said Solana Beach Councilwoman Jewel Edson.