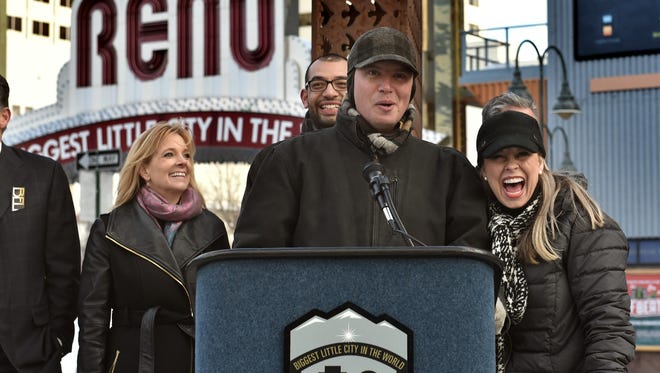 “Did you know that a word can be more powerful than a whole sentence or a resolution?” Schieve asked, standing in front of the 12-foot-tall steel sculpture that is temporarily installed in the public plaza adjacent to the Reno Arch in downtown Reno.

Completing the day’s theme, Journey’s “Don’t Stop Believing” rang out over speakers before and after Schieve’s remarks. 2015 RGJ Citizen of the Year Jeff Bryant read the proclamation declaring the day “Believe in Reno Day”.

“We had a lot of incredible accomplishments (in 2015), but I’m ready to turn the page and make this city even better,” she said.

Reno purchased the Believe sculpture for $70,000 from Burning Man artists Jeff Schomberg and Laura Kimpton. It will be erected permanently outside City Hall on City Plaza next spring, once construction of the Virginia Street Bridge is complete.

Until then, the sculpture will welcome tourists and residents visiting the Reno Arch.

Kimpton said the Believe piece was the first word sculpture she and her partner had sold to a city, joking that their “price had gone up” since Reno purchased the artwork.

Kimpton, who said she was dyslexic, said she understood the power of words, which have always challenged her. She says the Believe statue is meant to encourage people to have faith in good.

“It is meant to dispel the angst our world is falling into,” she said.

For Schieve and other civic leaders, the status represents the ethos she is striving to create in a city emerging from a tough recession as a “leader of creativity and innovation.”

“As we say goodbye to 2015 and welcome a new year, now is the perfect time to believe in Reno,” said City Manager Andrew Clinger.

The Believe sculpture is one of 170 works collected by the city since a 1992 ordinance began requiring all new city parks and buildings to have a piece of public art featured on the property. Five of these pieces were first displayed at Burning Man, an annual week-long gathering in the Black Rock Desert.