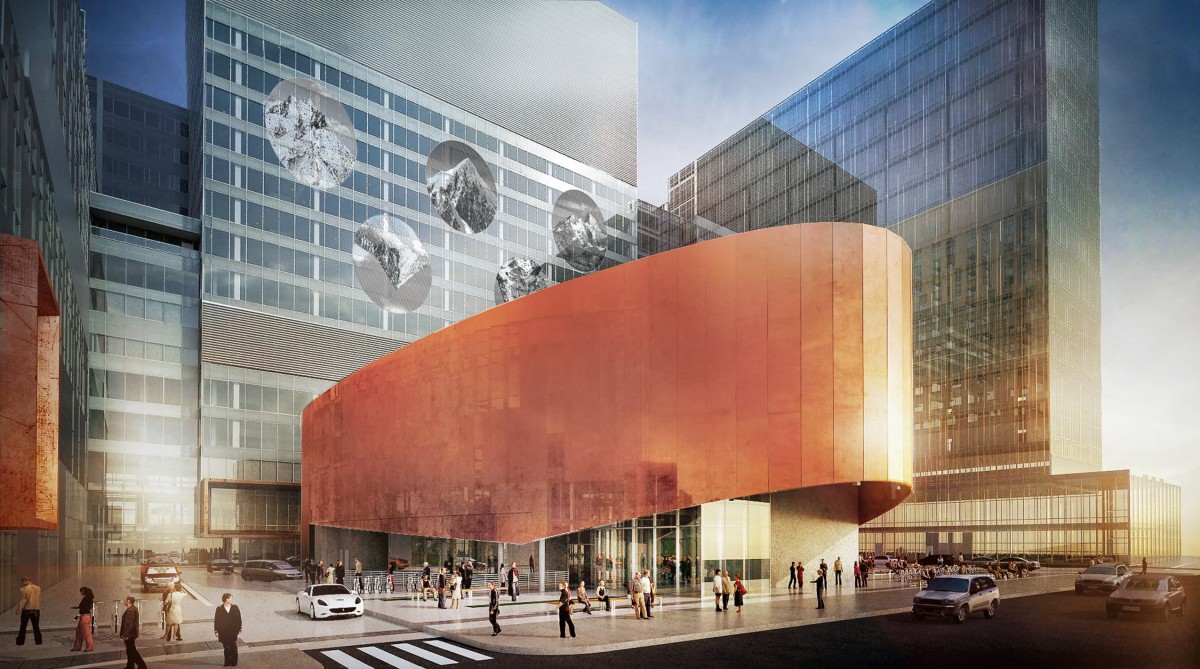 The new super-hospital aims to revitalize a stretch of downtown.

The University of Montreal Hospital Center is not only the largest healthcare construction project in North America, but when the 3 million square foot super-hospital is completed, it will also house the largest concentration of public art in Montreal since Expo 67, half a century ago.

A total of 13 large-scale works of art were integrated into the final design of the CHUM site, all in the public spaces inside and outside the building, which are numerous. “Azad Chichmanian, of NEUF architect(e)s and CannonDesign, headquartered in New York, said the goal was a seamless integration of architecture and art that would be soothing to visitors to the hospital and welcoming to all.

“It’s a public building. It’s a public service institution, so we don’t want to turn our backs on it and we don’t want it to feel like it’s not welcome here,” he says. “[CHUM] is the hospital. … It is the crown jewel and the central organizing element of the entire health sector in Quebec.

The CHUM is the teaching hospital of the University of Montreal, the result of the merger of the three major French-speaking hospitals in Montreal in the mid-1990s. At the time, while the merger solved some of the hospitals’ problems in terms of efficiency, cost and care, infrastructure needs have been left out. The new CHUM site will unite the three hospitals in a series of new buildings presented as both an improved medical facility and the revitalization of a neglected stretch of downtown into a new health district.

Thus, art and public spaces fulfill overlapping roles: they break up what might otherwise be an imposing building and offer a series of gradations from the very public life of rue Saint Denis to the very private interior of a hospital room.

“People are born on one side and unfortunately die on the other, the full cycle of life and the emotion that follows, so for every tool we had, we tried to use it to make sure that ‘it was not only extremely functional and efficient, but also humane, accessible and beautiful,” says Chichmanian. “The scale could be overwhelming and unwelcoming and it was a challenge to make sure it felt like a building permeable, a welcoming building in which you would not be lost.”

Along Saint-Denis Street, one of Canada’s and Montreal’s most famous streets, Neuf and CannonDesign have incorporated sections of a historic church and house, a part-indoor, part-outdoor contemplation space and a large public courtyard with an amphitheater, intended to break up the facade and relate to the low and mid-rise buildings across the street.

“The CHUM is a city within the city,” explains Yves Louis-Seize, a Montreal artist who chaired the project’s artistic committee. Quebec has an ordinance requiring that 1% of the total construction costs of a public project be set aside for public art. With an artistic budget of more than 2 million Canadian dollars and a total of 13 major works of art completed, planned or in progress, the CHUM is the largest project in the history of the program.

In choosing the works of art, Louis-Seize says the committee looked for works “of our time and stimulating” and which also met the needs of those who visited or worked in a hospital. Works of art had to be accessible and easy to clean in case of infection, and also provide a space for healing and quiet contemplation.

A work by Mathieu Doyon depicts five mountain peaks, engraved in glass on eight floors of the Saint-Denis facade of the hospital. Another, signed Louise Viger, adorns the atrium which will serve as the main public entrance until the end of the second phase of the CHUM. His work, “The Crossing of the Fireflies”, is an ascending series of jagged ledges that will glow a soft blue.

Other works of art are integrated more seamlessly and play a dual role. Artists Cynthia Dinan-Mitchell and Yannick Pouliot provided ornate pews. Nicolas Baier’s installation, “Ligne de vie”, traces the ribbon of the public space on the Saint-Denis side of the building. It mimics the flashing, pointed line of an electrocardiograph monitor, moving across the public space, providing orientation. In addition to the large central courtyard, the design includes rooftop terraces that open up the rooms to air and light, which medical professionals increasingly see as vital for healing. Some of these terraces also feature large representations of medicinal plants dating back to the founding of Montreal.

A pedestrian bridge connecting two buildings – normally a no-no in Montreal, which relies on underground connections – has been transformed into a work of art in its own right. Clad in perforated copper, the bridge appears as a shimmering arch when illuminated at night.

The historic church tower will also house a work of art, the first sound installation funded by the 1% for Art program. Louis-Seize says the installation responds to the steeple’s unique acoustics and will include sensors that allow sounds to change based on how a visitor moves through the space.

Another first for the Quebec art program: an artist has been commissioned to document the construction process in photographs and writing, and will present the results in the form of a book at the end. It is one of the most ephemeral works ever financed by the program, but it seems closely linked to the complexity of the evolution of the CHUM. The super-hospital has been under construction for more than a decade, and Chichmanian says it has become a scapegoat for all the shortcomings Quebecers see in their society. He hopes the end result will rekindle a faith in big public projects that was so hurt by the city’s very expensive 1976 Olympics.

And perhaps also faith in hospitals. “It is unfortunately not a pleasant experience here, so this hospital really had the ambition to give a human side to the delivery of care in Quebec, nothing less than to want to redefine the perception that Quebecers have of the hospital. he says.

The first phase of the CHUM will be operational in the fall of 2017 and includes 10 works. Phase two will contain the other three.

Jen Kinney is a freelance writer and documentary photographer. His work has also appeared in Philadelphia Magazine, High Country News Online and Anchorage Press. She is currently a radio production student at the Salt Institute of Documentary Studies. See his work on jakinney.com.

Follow Jen .(JavaScript must be enabled to view this email address)