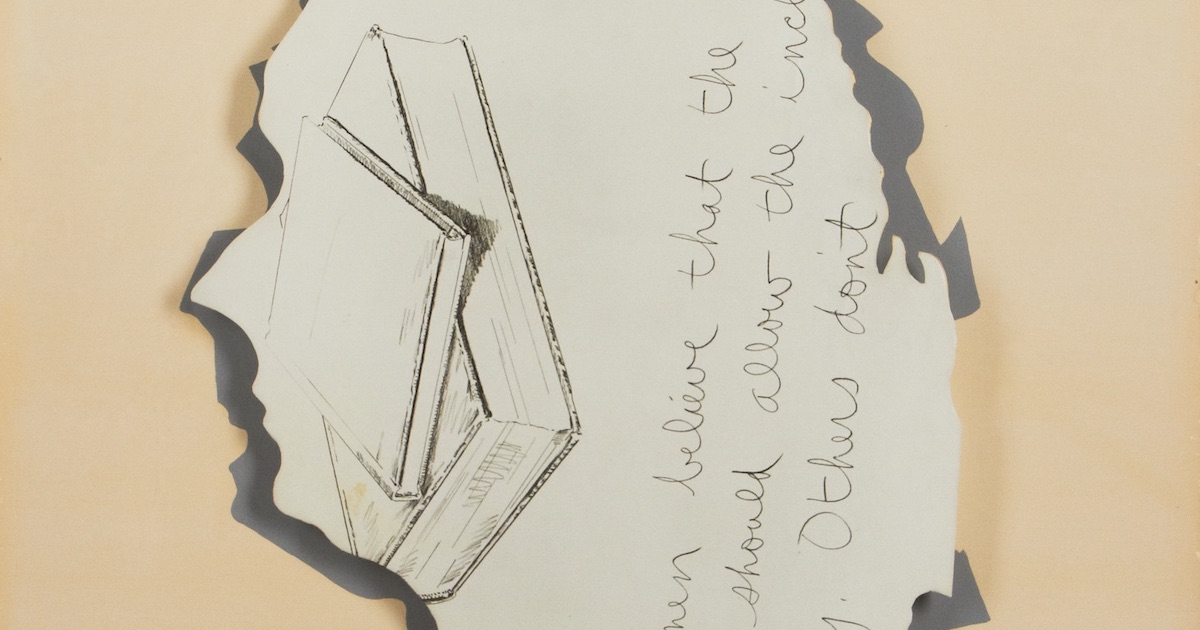 BAKERSFIELD, CA – As artist Joe Fay recalls, shortly after meeting Joan Quinn, she made a very simple request that would prove to be a big help in her future: “You should do my portrait.” He took her advice, and in no time Fay was creating colorful semi-abstract portraits of Joan and her husband, Jack. Two years later, portraits of their daughters, Amanda and Jennifer, followed. “Joan was kind and supportive,” Fay recalls. “She had the portraits published in Los Angeles Magazine and more commissions came in at $1,200 each.

The vibrant portraits of Fay de Joan and her family are among the highlights of On the Edge: 1970s-1990s Los Angeles Art from the Joan and Jack Quinn Family Collection, on display at the Bakersfield Museum of Art. The exhibition includes a number of varied and offbeat portraits, by different artists, of a woman who was driven by curiosity and a desire to encourage creativity as opposed to a need to nurture personal vanity. For example, George Herms depicted Joan as a sphere of rusted metal on a scorched pedestal of scrap wood. Allen Ruppersberg depicted her as a cutout figure adorned with books and texts. And Jean-Michel Basquiat crunched his jeweled wrists and fingers alongside two stylized monkeys. Basquiat’s “fee” for the portrait was a handful of seals that the legendary actor and drag queen Divine had left in a drawer in the Quinns’ house.

Originally from Los Angeles and the daughter of well-to-do parents – motorsports promoter JC Agajanian and his wife, Hazel Faye – Joan made her first portrait at the age of 16 and met up-and-coming artists in high school. As LA’s art scene grew in the late 1950s and early 1960s, it already served as a social nexus for the emerging “Cool School” that aspired to challenge New York’s dominance. Working as Andy Warhol’s West Coast Editor Interview magazine and later as editor of Conde Nast Traveler, Joan crossed the ribs and did everything possible to put her artist friends in the media spotlight. She also made sure that the snobbery that many artists faced on the East Coast had an antidote on the West Coast: genuine camaraderie and friendship.

The Quinns’ Beverly Hills home, which still houses a treasure trove of works by LA artists, has been the site of countless pool parties where entertainers, Hollywood types and socialites have met and networked. Jack Quinn often provided legal assistance to artists who needed help paying parking tickets, reading contracts, or collecting money from a dealer, or who had been arrested for possessing weed.

“I took the whole family on hot days for swimming and lunch,” recalls Joe Fay. “The Quinns treated us like their own and you could talk to Joan or Jack about anything. They were real friends in a way that went beyond art. For years, Jack was often my tennis partner and we played against entertainers (Chuck Arnoldi), celebrities (Ricky Nelson and Regis Philbin), as well as Federal Judge Matt Byrne.

Over time, Joan inspired more than 300 portraits, but as the works on display at the Bakersfield Museum show, they are only part of a sprawling collection. Works by Ed Moses, Lynda Benglis, Peter Alexander, Frank Gehry, Robert Graham and Ed Ruscha are some of the standout works in the exhibition, curated by Rachel McCullah Wainwright, who “took a fresh look at it” , as Joan commented. The result sheds new light on the emergence of art in Los Angeles and will serve as a boon for art historians for years to come. Again, seeing On the edge purely in terms of art history misses what the Quinn family and their guests have enjoyed for years, that their collection is truly about friendship and encouragement.

On the Edge: 1970s-1990s Los Angeles Art from the Joan and Jack Quinn Family Collection continues at the Bakersfield Museum of Art (1930 R Street, Bakersfield, CA) through April 2, 2022. The exhibit was curated by Rachel McCullah Winright.