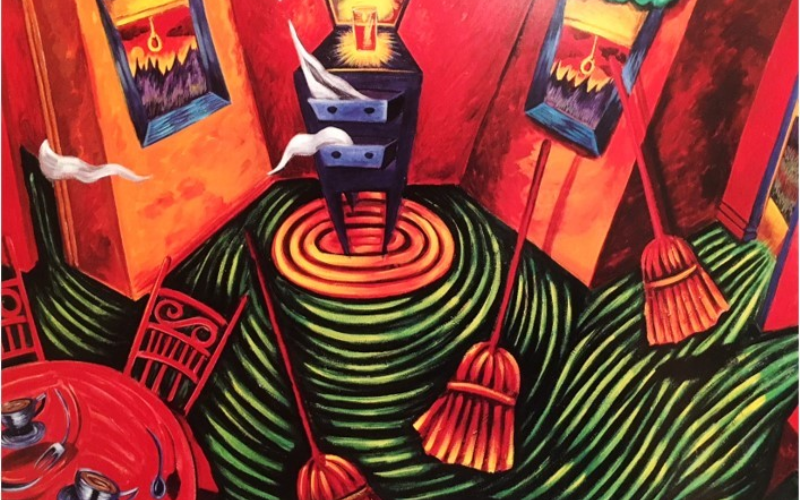 Cheech Marin shared how he hoped his collection of Chicano art would transform the word Chicano in the minds of viewers when he visited Sun Valley in 2008.

Now, his collection of Chicano art will be the subject of a free Art Talk on Friday at the Hailey Public Library.

Art educator Kathryn Zupsic will tell the story of art collector Cheech Marin – part of the 1970s and 80s comedy duo Cheech & Chong – at 7 p.m. on Friday, September 30, at the Hailey Town Center West, opposite from the library. Simultaneous Spanish translation will be available.

The free lecture is the last in a three-part series on Hispanic icons of modern art.

Marin, who came to Sun Valley to discuss Chicano art on behalf of what was then the Sun Valley Center for the Arts in 2008, specializes in modern painting, sculpture, and photography. This year he opened the 61,000 square foot Cheech Marin Center for Chicano Art, Culture & Industry in Riverside, California to showcase what is considered one of the most important collections of Chicano art in the world.

Cheech Marin told journalist Karen Bossick in 2008 that he had the same feeling the first time he stood in front of a Chicano painting as when he first heard a Beatles song.

It was the feeling of experiencing something very familiar and yet very new, he said.

“I grew up a Catholic and was always surrounded by statues and stained glass and that kind of thing in the church. I used to go to the library to check out art books in sixth grade. “, he said. “I can’t draw a single line myself. But when I got to a position where I could buy art, I did, partly because I ‘ve always been intrigued by the power that art can have over its viewers.

He added that he hopes his artwork, which includes works by artists like Carlos Almaraz, Gronk, Wayne Healy, Adan Hernandez, Leo Limon Frank Romer, John Valadez, Patassi Valdez and Vincent Valdez, presents Chicanos in a positive new light for viewers since the word Chicano used to identify Mexicans in the United States United was originally an insult.

“Chicano art conveys a theme of what it’s like to be Chicano, what it’s like to be out of the mainstream. There’s a lot going on in the neighborhood, whether it’s family life or drive-by shootings,” said Marin, who earned a Bachelor of Arts in English at California State-Northridge and was the first famous Jeopardy champion.

Zupsic’s conference will focus on the incredible contemporary Chicano artists working in Southern California and Texas, said organizer Kristin Fletcher, the library’s program and engagement manager. “Kathryn really knows art history and has an eye for selecting the perfect images to tell a great story.”

Zupsic has been an art teacher for over 25 years, working as a guide and lecturer for the Santa Barbara Museum of Art, the de Young Museum, and the San Francisco Museum of Modern Art. She specializes in modern art, from Frida Kahlo, to pop art, including the art of tattooing.