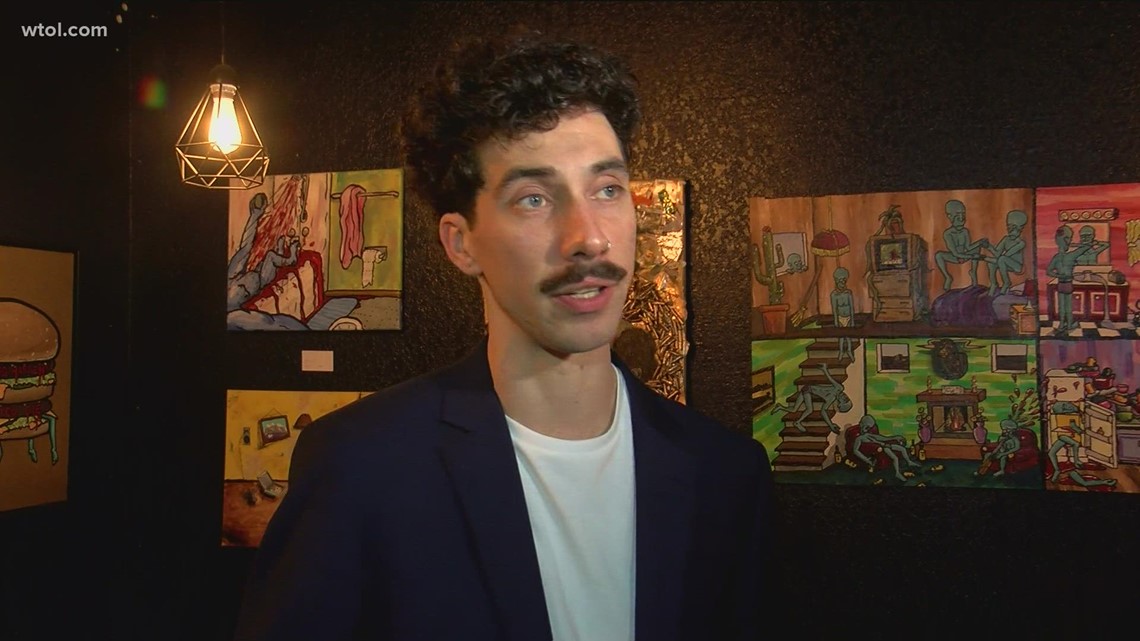 Two years ago, Benjamin Crane had a spinal tumor. Now he is debuting his first solo art exhibition.

TOLEDO, Ohio — A Toledo-area artist unveiled his first solo art exhibit at the Ottawa Tavern on Friday night, but the accomplishment doesn’t come without reflecting on a darker time in his life.

It was Christmas Eve 2020 when artist Benjamin Crane received the news that no one ever wants to hear.

“I had a cancerous tumor in the middle of my spinal cord, just below my brain; I had to do a few surgeries, I had to go on a long regimen of chemotherapy and radiation,” Crane said.

At the same time, Crane said he struggled with addiction. He had to find an outlet to help him in the fight.

“Getting rid of it was a triggering experience. Having to relive that just to get good art out of it isn’t always therapeutic, but it makes for great art,” Crane said.

At home, Crane used his time to work on his gallery, a project he said was sometimes a very difficult experience.

“It’s been so raw to think about what I’ve been through so intensely to put pen to paper and try to portray it in a visually appealing way that I’m happy with, and really get my designs across,” said Skull.

Crane’s friend, Emilie Ponke, is the social media manager at Ottawa Tavern. Ponke went to high school with Crane and knows his struggles. She said she knew how important this outlet was to him and what he had been through.

“We went to high school together and had so many art classes together, and he always excelled above everyone else, in creativity, technique and everything,” Ponke said.

Crane called his artwork a personal turning point, allowing him to speak out for the world to see.

“That’s been all. It’s the only thing I could think of and accomplished. It’s been good to show up in a way that seems productive and shows your true self in a certain way. way,” Crane said.

Crane completed her chemotherapy treatments in January. He also credits therapy for getting him through the past two years.