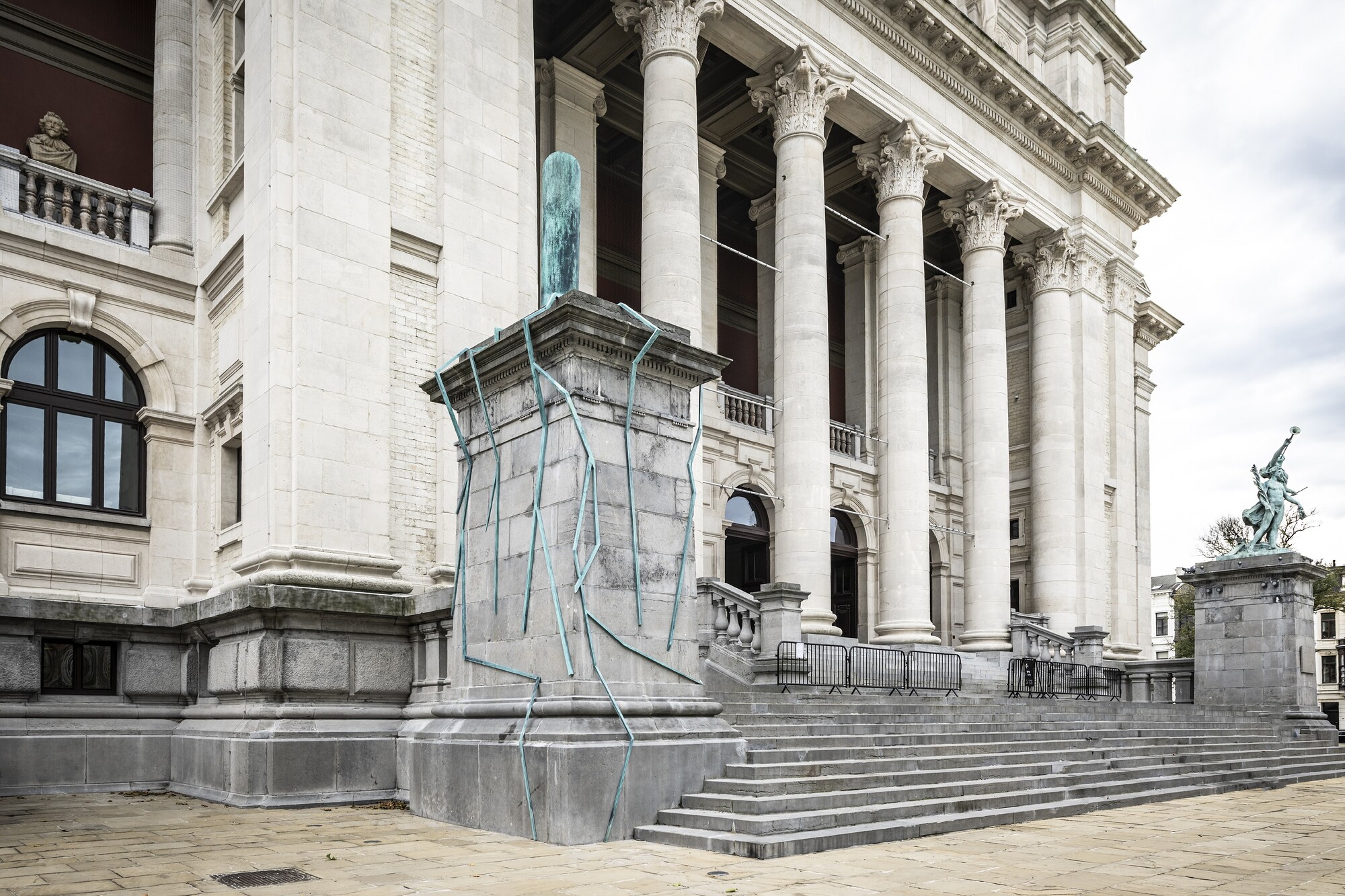 By Leeann M. ParadisoNovember 8, 2022No Comments

Mimicry is commissioned by the city of Antwerp on the occasion of the reopening of the Royal Museum of Fine Arts Antwerp (KMSKA) in autumn 2022. Since the original opening of the museum in 1890, the plinth flanking the side left of the large the steps leading to the museum remained empty. Today it has become the site of a unique and highly site-sensitive contemporary work of art.

Traditionally, plinths are used to create a distance between a statue and the public, between the work of art and the “ordinary world”. Here, however, the sculpture – a network of roots and an abstract tree trunk – descends to the ground and finds firm ground in the shared public space of the city. Dujourie thus connects the museum to the world and shortens the distance between the street and the imposing museum building.

The sharp line of the bronze elements refers to the design, now set against a background of Belgian bluestone rather than paper or canvas. The color and texture of the sculpture are nods to other works of art in the immediate vicinity: Notoriety by Léon Mignon on the opposite base (1896, KMSKA collection) and deep fountain by Cristina Iglesias (2006, Antwerp Public Art Collection) in front of the museum. With the latter, Mimicry also shares a reference to nature and organic forms.

Nature, along with the human form, is perhaps the most important motif in the history of art. And just as the many painted or sculpted bodies in the KMSKA collection convey an idealized body image, nature has long been the subject of an artistic search for perfection. This tradition of depicting an ideal world is historically referred to as art with the ancient Greek word mimicry.

Dujourie’s work refers to this tradition and is also its extension. She does not offer a romantic or naturalistic imitation of a tree, but rather the representation of the thought of a tree. The thought of the roots of trees which, although invisible, are part of a millennial vital system. A worldwide underground network of collaboration and healing. What normally remains invisible then becomes an object of reflection and observation.

The roots that “grow” on the base carry many symbolic associations that will develop over time, and will grow with the city and the museum. Lili Dujourie shows that a museum and its building can be a source of life. Roots also refer to the past as fertile ground: just like the roots of trees, (art) history is erratically branched and therefore always multiple, never singular or linear. Roots are a strong symbol of origin and inspiration, nourishment and growth. If museums are repositories of a heritage, it should not be forgotten that this heritage too has a complex and complex history that stems from divergent roots. The tree motif also evokes an ecological reading of the work, in which nature is evoked as a primordial force in relation to human culture.

About the artist
The work of Lili Dujourie (1941, Roeselare, Belgium) mixes the influences of Flemish Primitives such as Jan Van Eyck with her personal artistic approach, starting from the end of the 1960s. The central themes of her work are the relationship between nature and culture, the passage and weight of time and its search for an emotional understanding of space.

Dujourie was awarded the Flemish Culture Prize for the Visual Arts in 2015. Her work is collected by major Belgian and international museums, as well as by private collections.