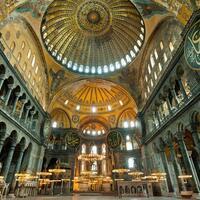 Turks have visited the country’s virtual museums more than 800,000 times during a period when museum buildings are closed to visitors as part of measures to mitigate the spread of the novel coronavirus.

Some 13 major museums in Turkey were visited 810,410 times online during the lockdown, authorities from Turkey’s Ministry of Culture and Tourism told Anadolu Agency.

The ministry launched the virtual museum app in late March as the COVID-19 outbreak has also affected the country’s cultural and artistic life, officials said.

The museums, which house millions of rare works of culture and arts, have been made available to visit in the virtual environment at sanalmuze.gov.tr.

Among others, Göbeklitepe, the more than 10,000-year-old site discovered in 1963 by researchers from the universities of Istanbul and Chicago, which is also included in the UNESCO World Heritage List, was virtually the most visited – 255,150 times.

In the virtual museum application, which gives the impression of walking on site, visitors can start their virtual visit from any section of the museum.

If history buffs have the opportunity to examine the works presented by zooming in in 3D format, virtual travelers can also access information on the history of the works and places presented in the museums.

Those interested can access a myriad of museums, palaces, mosques, churches, monasteries and fortresses listed by the Turkish Ministry of Culture and Tourism at ktb.gov.tr.

Meanwhile, Google Art & Culture also offers tours of more than 500 museums and galleries around the world, including the British Museum, the Louvre and the United States National Art Gallery, on artsandculture.google.com.