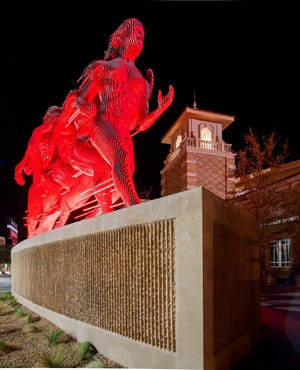 If you enter the Texas Tech campus from the south on Flint Avenue, you will see a large steel sculpture on the northeast corner of 18th Street across from the architectural building. It was created by Robert Bruno, a former College of Architecture professor best known for his Steel House in Ransom Canyon. Established in 1974, it languished in a weedy field east of Lubbock until it was moved to campus in 2015. Although “Untitled”, students gave it many nicknames including AT -AT (All Terrain-Armored Transport from the Star Wars Universe).

Tech’s Public Art Committee purchased and moved the work for inclusion in the 253 works of art in the collection. Some have been donated, while 122 of these pieces have been funded through an initiative launched in 1998 to dedicate 1% of the estimated total cost of each new capital project to commissioning high-quality artwork. quality at the system’s six campuses: Lubbock, San Angelo, El Paso, Abilene, Amarillo and Odessa. The current value of the collection is $13.5 million based on purchase cost.

The collection includes artwork that was on campus prior to the 1998 program. The best-known piece is “Riding into the Sunset”, 1947, the bronze statue of Will Rogers on his horse, Soapsuds. Amon Carter dedicated the piece in 1950. He was a friend of the artist, Electra Wagoner Biggs, and thought Tech was the perfect setting.

The second oldest piece in the collection is the Holden Hall Mural by Peter Hurd made in 1953-54 when the building housed the University Museum.

Twelve years ago, Texas Tech’s Public Art was named one of the Top 10 Collections of American Colleges and Universities by Public Art Review. Since then, an increasing number of internationally acclaimed artists have applied for projects that are published with requests for qualifications. The Nomination Review Committee is made up of 18 community members, alumni, faculty, or staff from the various campuses. Each project also has a representative of the department or establishment concerned

A South African artist, Marco Cianfanelli, was chosen for the Research Park building on 4th Street. His piece, titled “Knowledge Structure”, 2015, looks like a tree, but from particular angles it looks like a human brain on stilts. When it was shipped to the port of New Orleans, the crates and papers had shown the original title, “Tree of Knowledge”. He was retained for the agricultural inspections.

While the majority of artists are American, others hail from Spain, the UK, Germany and China. When the finalists are chosen, the artists present their concept as prescribed in the RFQ. When the final selection is made, the artist often works with the committee and project representatives to refine the concept to better reflect the relationship to the project. Final approval rests with the President and Chancellor.

The most recently installed room on the Lubbock campus is located between the Sports Performance Center and the football stadium. Titled “Run”, it is made up of five sequential depictions in stainless steel of a running female athlete. Artists Simon Donovan and Ben Olmstead initially came up with a male figure, but modified it during the process of working with the committee, the TTU chairman and athletic department officials.

Over the past year, three pieces have been installed at Angelo State University, one at the Permian Basin Academic Facility in Odessa, and one at the Panhandle Clinical Simulation Center in Amarillo in addition to the two mentioned at the Lubbock campus. There are eight other projects underway in Lubbock and one at the Health Sciences Center in El Paso.

Guided walking tours are available with a free mobile phone app, ArtTrek, launched last spring. For most of the works, the artists participated in the writing of the explanatory plates that accompany each work. Now the app lets them actually talk about the article so people can hear their perspective and process.

ArtRide LBK is an art bike tour that begins at the LH Underwood Center for the Arts on the first Saturday of each month at 10 a.m. and includes at least five or six on-campus plays. Emily Wilkinson is the Director of the Public Art Program and can be contacted at Emily.Wilkinson@ttu.edu.