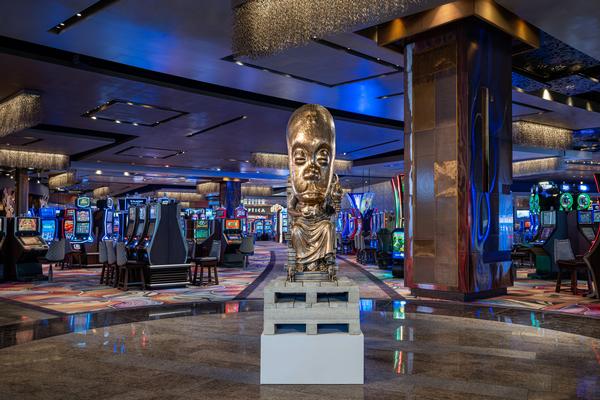 MGM Resorts revamps its art collection with a focus on diversity, equity and inclusion

WHY IT RATES: MGM Resorts’ commitment to diversity, equity and inclusion (DEI) has led the company to seek out fresh artwork and talent to showcase at its properties; and in doing so, provide a platform for artists of color, women, and the LGBTQIA+ community that amplifies their voices and inspires new conversations. — Laurie Baratti, TravelPulse Associate Editor

The company’s goal is to provide an expansive platform for artists of color, women and the LGBTQIA+ community, and to amplify those voices across its portfolio, reflecting MGM’s commitment to advancing diversity, global equity and inclusion.

“We believe in the power of art to open minds, change perspectives and create transformation in society,” said Ari Kastrati, Hospitality Director of MGM Resorts. “Adding these talented artists to our portfolio reflects MGM’s commitment to championing inclusion and ensuring the collection more closely reflects our diverse communities. This commitment is at the heart of our company’s core values ​​and is imbued with everything we do.”

New artists in the collection include:

— Rachid Johnson – One of today’s most prominent contemporary artists, Johnson combines photography, sculpture and painting to inspire conversation about race and class. Using materials that correspond to moments in history, including specific references to African-American life, Johnson aims to create art that can serve as a bridge across cultural barriers. Of his work, Johnson said, “I think of Cosmic Slops as paintings. I think it’s a process for me that has helped me reintroduce painting into my practice. I often come to the studio and c It’s almost a meditative space for me to be able to do a Cosmic Slop. It works almost like stretching before a workout. That’s when I have to start understanding my body, thinking about the materials that I used, to reflect on the authenticity of my gesture and how I am the author of this gesture. And it seems entirely mine… I think there is an opportunity for truth there And we don’t have so many opportunities to be so genuine and so genuine and so real. And I think that particular body of work from me is very real.”

MGM Resorts has acquired one of Johnson’s three-dimensional murals from the Cosmic Slop series featuring black soap and microcrystalline wax, which are melted together and then poured by hand to create unique surfaces. The work is located on the promenade level of ARIA.

— Sanford’s Greatest – Powerful and poignant, Biggers’ work offers perspective on key moments in American history by emphasizing neglected cultural narratives from a social, political, and economic perspective. Last summer, Biggers’ largest work to date, his monumental bronze sculpture, Oracle, was exhibited at Rockefeller Center. Oracle draws on Biggers’ Chimera series, which combines African masks and European figures to shed light on how Greco-Roman and African sculpture was transformed over time to reinforce often misunderstood perspectives on culture and aesthetics. Oracle is a seated body reminiscent of the Temple of Zeus with a head inspired by the masks and sculptures of African cultures.

MGM Resorts has acquired a smaller scale bronze sculpture of Oracle (2021) which has been installed at ARIA near the entrance to the resort’s self-parking lot.

— Derrick Adams – Adams is a painter who uses patterns, collages and a bold palette to create graphic paintings that are iconic of black culture. In particular, the artist probes how the experiences of Black Americans relate to American iconography, art history, urban environments, and consumerism. In his Floater series, Adams depicts characters relaxing in pools of water, suggesting respite is a political statement when embraced by black communities. Discussing his Floater pieces with Vogue, Adams said: “I wanted to occupy a different space from all the artists who were talking about issues of race, trauma and oppression. People couldn’t exist if they lived in grief. My work is centered on the idea that it is crucial for black people to think of leisure as a radical act.” In Adams Floater’s works and his oeuvre in general, black joy and possibility remain at the forefront, evoked through scenes of leisure and normality – rethinking the perceptions that media and visual culture often put forward.

MGM Resorts recently commissioned a new mixed media painting from Adams’ Floater series, which is currently in production. This Floater is a particularly rare example of this body of work as it consists of acrylic and fabric on canvas. Once completed, the work will be installed at Park MGM, near the entrance to the complex’s swimming pool.

— Ghada Amer – While Amer’s art spans painting, cast sculpture, ceramics, works on paper, garden and mixed media installations, she is widely known for her expertise in depicting women through wire. Focused on the portrayal of femininity in diverse contexts, Amer’s work serves to empower women to realize their true identity and reach their full potential outside of cultural and religious norm constructs often shaped by masculine views. .

MGM Resorts has acquired two of Amer’s works featuring acrylic, embroidery and gel on canvas from its “The Women I Know Part II” series, which includes embroidered and painted portraits of women Amer knows personally . For each portrait, the artist includes phrases and quotes regarding feminist and social issues, including lines such as “Don’t fit in the glass slipper like Cinderella did – break the glass ceiling.” About the series, Amer said: “I now feel freed from the canon of art history and the father figures of painting. The only reference now in my work is the subject, that is, -say the painting itself.” Amer’s artwork features prominently in the Bellagio’s spa and salon.

— Jonathan Lyndon Chase – Chase’s work focuses on the nuances of queer black life in vivid portraits, showing subjects in various aspects of domestic life. Comprising painting, collage, and drawing, Chase’s bold canvases often depict floating heads and bodies overlapping against colorful, ambiguous backgrounds and explore how closeness is essential to community connectedness. Regarding Chase’s approach to their work, the artist said, “I try to paint very honestly with a delicacy for the body. I’m a big softie, and I’ve been described as being vulnerable and transparent. I like to feel a connection to people. In my work, I think about how queer bodies, black bodies are very complex.

MGM Resorts acquired Chase’s artwork The Cook Out (2019), comprising acrylic paint, oil paint, spray paint, oil stick, marker and graphite on canvas, which is located at Park MGM, next to the resort lobby.

— Tomas Esson – Tomás Esson’s work reflects his love for painting but is tempered by the dark subject matter that many of his works depict. Esson was born in Cuba but emigrated to the United States in the early 1990s. His works are often inspired by the cultural challenges of the 1980s. The mythical creatures depicted in Esson’s paintings are grotesque and have an identity of their own. clean, free of illustrative references and weaknesses. The “Miami Flow” paintings, which began in 2015, intensify the bursts of landscape that have always been present in Esson’s figurative works into a dynamic abstraction. Beginning with sexualized flowers and lascivious vegetation in the early paintings of the series, the “speed” of the work eventually led the “Miami Flow” paintings to become increasingly abstract, cut off from any obvious referent. Esson here borrows the logic of the coupling of forms (from ancient animation) to intensify an abstract vision. It is almost as if the sub-visual dynamics of the landscapes – the microbial and chemical transaction – are magnified into gestural visual forms.

MGM Resorts has acquired the Esson Quimera (2021) and Anestesia (2018) linseed oil factories. Quimera is located just outside the Bellagio Conservatory and Botanical Garden and Anestesia is displayed in the resort’s VIP Lounge.

— Svenja Deininger – Prolonged time is crucial in the composition of Deininger’s work: starting with an initial visual concept, through a gradual process of juxtaposing patterns, tones, shapes and memories from a vast archive of art historical references, Deininger’s configurations eventually emerge. Yet such a composition can be recalibrated by a series of changes in the organization of pictorial space. It is a patient, continuous, even obsessive process of working out and adjusting the possibilities of a distinct vocabulary of forms and its multiple incarnations. Time, or rather the abundance of time, is the key to another crucial aspect of Deininger’s work: the surface, not to say the skin. On closer inspection, Deininger’s paintings reveal a carefully measured system of surface treatments of form: a series of patient gestures of painting, scraping, polishing and repainting. It is a process that allows light to have a determining role on every painted surface. The result is a layering of clearly defined patterns processed with a variety of techniques, producing different textures with tiny deviations in thickness. her practice is an organic and holistic cycle of creation, using time to look and time to do as equal and decisive forces. A practice where looking is thinking is acting.

MGM Resorts has acquired a painting from Deininger’s new body of work reflecting the artist’s deliberate yet fluid explorations of the dialogues between form, color, texture and surface that reside in his complex compositions. The Untitled piece is on display at the Carbone restaurant at ARIA.

Tarissa Tiberti, Executive Director of MGM Resorts Art & Culture, said: “The acquisition of works by Rashid Johnson, Sanford Biggers, Derrick Adams, Ghada Amer, Jonathan Lyndon Chase, Tomás Esson and Svenja Deininger propels the MGM Resorts Fine Collection Art in meaningful ways in our goal to give voice to underrepresented artists. We look forward to sharing these important pieces with our guests around the world and sparking conversation around all they represent.