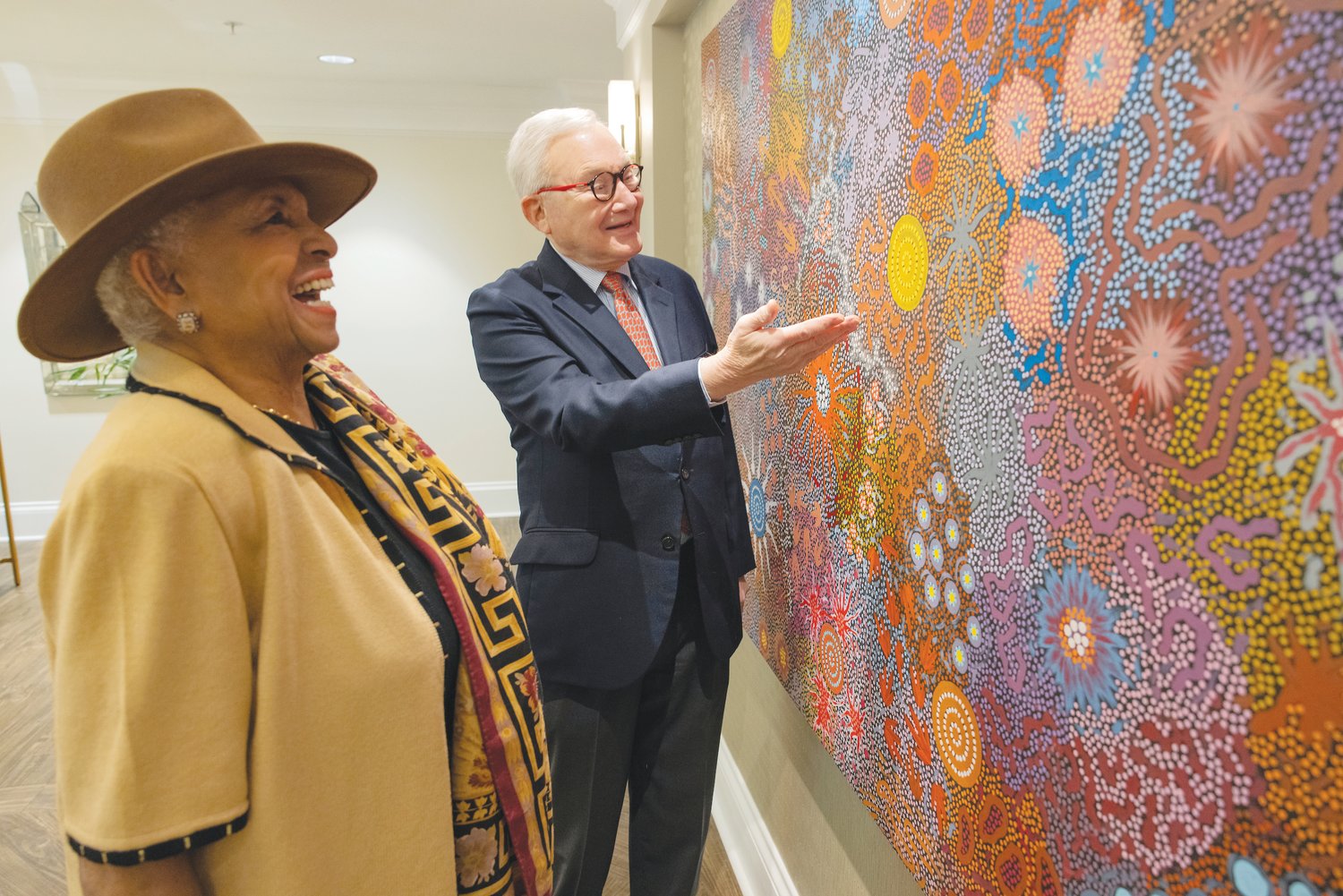 PITTSBORO — If art has the power to stir the emotions and soothe the soul, residents, staff and visitors to the Galloway Ridge Retirement Community in Fearrington Village can find both stimulation and peace as they enter in the gallery they call theirs.

Led by resident Roger Berkowitz, the esteemed director emeritus of the Toledo Museum of Art, Galloway Ridge has cultivated a powerful and expanding art collection. Over the past two years, Berkowitz has acquired over 150 original works by a group of notable artists from around the world.

Berkowitz’s vision began to materialize in early 2020 when he and a small art advisory committee embarked on a mission to establish a permanent art collection in the hallways and public spaces of Galloway Ridge.

“The main building was being renovated and the administrators asked me to acquire some original artwork that could go in the lobby,” Berkowitz said. “After we started, it was clear that it made such a difference to have original artwork and not reproductions, which are much more common in these types of installations.”

With Berkowitz in the lead, the Galloway Ridge Advisory Board began fundraising and selecting original artwork to replace each tired reproduction. Funding comes directly from residents of Galloway Ridge.

From all over the world

Committed to the highest quality standards, Berkowitz sources its supplies from dealers and auction houses, including residents of Galloway Ridge who donate artwork from their own collections. Each work goes through a rigorous selection process before being purchased or accepted as a donation.

“We have established criteria for accepting artwork, whether purchased or given as a gift,” Berkowitz said.

They must be originals, created by notable artists who have a prolific history. Berkowitz and his committee favor art that has been reviewed, featured in juried exhibitions, or received public recognition.

At first, Berkowitz and the advisory board considered limiting Galloway Ridge’s art collection to North Carolina artists only, but later decided to broaden its scope.

“We recognize that our residents and guests of Galloway Ridge are well-traveled and worldly with a holistic view of society and culture,” he said. “While there are many works by North Carolina artists, we also feature pieces from different eras and countries around the world.”

Berkowitz is particularly proud of the community’s impressive collection of Indigenous artwork.

In the center of the lobby, visitors are greeted by one of the collection’s shining stars – a large, colorful painting depicting an aerial view of the remote countryside of Alice Springs in Australia’s Northern Territory. The painting by Michelle Possum Nungarrayi, a member of a famous family of Australian indigenous artists, is titled “Grandmother’s Country”. Resembling a map of the artist’s homeland, the painting is full of symbols representing important Aboriginal traditions. Its vibrant colors invite residents and visitors to enter Galloway Ridge’s main building and explore an enchanting place where staff and residents celebrate art every day.

In the Garden Room, just behind the lobby, stands Pittsboro artist Mark Hewitt’s “monumental vase,” fashioned from North Carolina clay and glazed with the artist’s signature patterns and textures. The tall, stately vase evokes a sense of place in a region where artists have been crafting objects of beauty from ordinary clay for generations.

“We wanted artwork that will be accessible to most people, and we strive for diversity,” Berkowitz said. “We don’t expect everyone to like everything, but we hope there is something everyone will find they like.”

The teacher becomes the student

Galloway Ridge, an upscale progressive care community, sits on 67 acres adjacent to the village of Fearrington. Its main building houses 248 self-contained living apartments and amenities including a library, cinema, business center and art studio. Additionally, the community includes 52 villa residences, a fitness center, and a health care center with 96 private rooms for assisted living, memory care, and skilled nursing. Surrounding the grounds are miles of walking trails and a dog park for the residents’ furry family members. The community has more than 450 inhabitants.

Berkowitz has lived in Galloway Ridge for five years. At 77, with silver hair and eyeglasses sporting frames to match his bright red tie, he bursts with energy and passion as he leads visitors on a spirited two-hour tour of the art collection, spread over the entire three-storey building. — even in stairwells “to entice residents to use the stairs,” he said.

As a young man, Berkowitz studied 19th-century English and decorative arts at the University of Michigan, where he earned a master’s degree in museum practice in 1970 and a doctorate. in 1977. He began his career in Ohio, at the Toledo Museum of Art in 1974, as curator of decorative arts and worked as chief curator and assistant director before becoming director in 1999. He retired in 2004 and moved to Fearrington Village with his wife, Rhoda, before moving to Galloway Ridge in 2017.

At the start of the COVID-19 pandemic shutdowns, Berkowitz recalled, the art project took on a life of its own. On the one hand, contacting potential donors was easier as people were confined to their apartments and villas and easy to reach. And art dealers were more than willing to negotiate prices because it was tough economic times.

“It took a while to get going at first, and we had no idea if it was going to be successful,” he said. “If there hadn’t been interest, we would have gone out of business before we were even in business.”

But over time, the project grew — first through small donations, which enabled Berkowitz to buy a few pieces and install them in prominent places. Gradually, his efforts took root as residents began to visualize the possibilities. He spent so much time on his computer looking for artwork to acquire that his wife joked that he was coming out of retirement and going back to work.

In a way, the Galloway Ridge art project is Berkowitz’s second act – and as a bonus, the master has become a student again.

“This project gave me a new and different way of working, and I learned a lot in the process,” he said.

Even the most amazing works of art are useless if people can’t see them.

As the pandemic raged, residents of Galloway Ridge remained locked in their villas and apartments, unaware of the magic unfolding right outside their doors. This is where art historian Davenne Essif came in. Former teacher at the Ackland Art Museum, holder of a doctorate. in Art History from UNC-Chapel Hill, Essif made it her mission to introduce residents to the art project, piece by piece, through a series of videos she produced for the independent broadcast channel Galloway Ridge.

As the art collection grows so does the video series, which remains a work in progress.

“When I started making the videos, there were 35 pieces of art, with a goal of having 60,” she said. “But now there are over 150 rooms spread throughout the facility.”

The videos compress space and time, allowing Essif to compare works of art even if they are located on opposite sides of the building.

As Berkowitz filled lobbies and common spaces with art, pandemic restrictions began to loosen; residents began venturing out of their villas and apartments to figure it all out. Some have made it their mission to visit every work of art in the building. For those who couldn’t go out or receive visitors from outside their community, the art was like a balm.

“Our residents have started looking at the art, expressing their feelings, talking to their neighbors about it, and this project has become an integral part of our life in Galloway Ridge during COVID-19,” Berkowitz said. “A resident told me that our art was the only thing that got him out of his apartment every week.”

Berkowitz likes to say that if he helped build the vehicle, then Essif filled his gas tank using his educational videos to motivate residents to appreciate the art.

“I focused on trying to provide our residents with enough information about the art, but also encouraging them to go out and visit it,” she said.

More recently, Essif took another step towards developing a complete art gallery experience and realizing Berkowitz’s dream: to launch a docent program. She has already begun training residents to become the first cohort of art teachers at Galloway Ridge.

“It’s a very exclusive program, which starts with four residents,” she says. “They will be trained to give art tours to fellow citizens, staff and visitors.”

Eventually, Essif and Berkowitz hope to put their guides to serious work when they can open the exhibit to visitors from the wider outside community.

For Berkowitz, this experience taught him the value of accessible and affordable art.

“Working in a museum like the one in Toledo, you’re always dealing with the crème de la crème of the art world,” he said. “And what I’ve realized is that there’s a lot of really good art that’s not necessarily museum-quality, but worth seeing and enjoying and learning about, and I discovered wonderful artists that I had never heard of before.”

From the beginning, Berkowitz’s vision has been for Galloway Ridge’s public spaces to feel like an extension of residents’ apartments or part of their homes. He recalled one of the best compliments he ever received for his work.

“I was outside one day, helping to hang some artwork,” he said. “One of our residents came to thank me and said, ‘Now Galloway Ridge really feels like home.'”